Canada faced stepped-up pressure Tuesday to match U.S. and United Kingdom shipments of defensive weapons to Ukraine as the threat of a Russian invasion continues to hang over eastern Europe.

The Liberal government has heard demands for weapons shipments both at home and in Kyiv, where Foreign Affairs Minister Mélanie Joly wrapped up a second day of meetings Tuesday with senior Ukrainian officials, including her counterpart Dmytro Kuleba.

At the same time, Canadian military officers and diplomats are grappling with the challenges they would face if they had to evacuate military trainers and civilians in a hurry.

Unlike those of other allied nations, Canada’s contingent of military trainers is spread out over 13 different locations in the western and central parts of Ukraine. Assembling them all for rapid evacuation could be difficult.

But the question of how far the Trudeau government is willing to go in supplying Ukraine with defensive weapons systems dominated Joly’s remarks Tuesday.

“We’ve heard loud and clear the demands on the part of the Ukrainian government. Many of the officials here have reiterated these demands,” Joly said during a joint media availability with Kuleba.

She may have heard the pleas, but Ottawa is still studying the request — as it has been for months. The U.K. announced on Monday that it has shipped anti-tank weapons along with a handful of soldiers to show the Ukrainians how to use them.

“We know that it is important to play our part in this context and therefore we are looking at options and we’ll take a decision in a timely manner,” Joly said.

The Ukrainian Canadian Congress (UCC) has been actively lobbying the Liberal government to support Ukraine and has had sit-down meetings with three federal ministers over the last few months.

“We are out talking to all parties, all officials who will meet with us,” said Ihor Michalchyshyn, the UCC’s  executive director.

Last month, the UCC presented Joly with a rough list of the defensive weapons it thought Canada could provide. It also called on the government to deploy additional sanctions against a Russian private security contractor singled out by the U.S. and European countries for penalties.

Michalchyshyn said he believes the federal government heard their pleas and appreciates the gravity of the situation — but there’s been no sign of action on the matter of defensive weapons.

“Our main point is to do it now,” Michalchyshyn said. “Russia will be deterred if Ukraine has assistance now, not after an invasion. It’s going to be too late to send Ukraine satellites systems and missiles if the Russians have already invaded.”

At the same time, peace advocates have stepped up their pleas for the Canadian government to deny the request for additional arms. 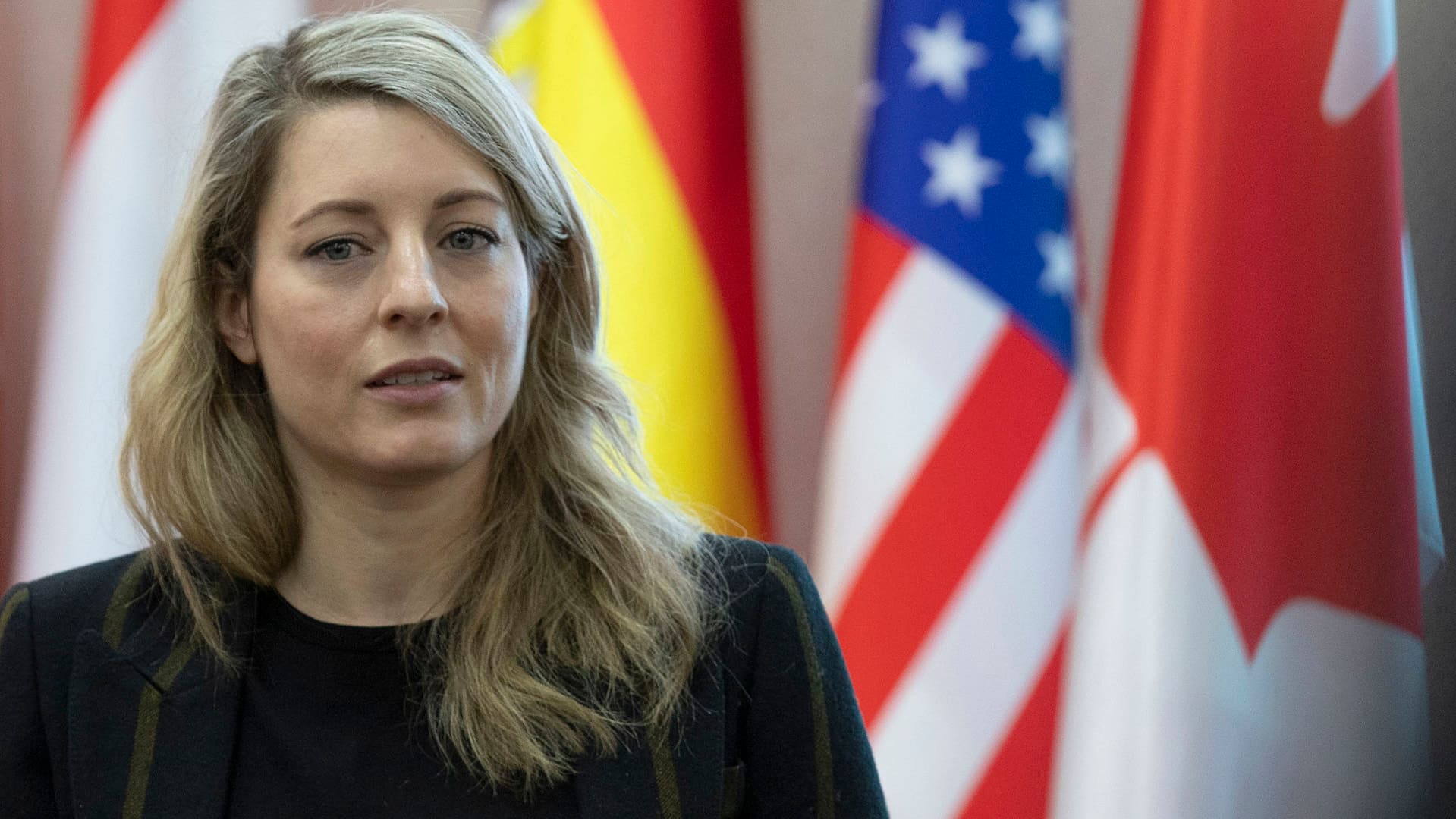 Canada joins allies in show of support for Ukraine

Foreign Minister Melanie Joly added to the show of Western support for Ukraine as tensions with Russia escalate. 2:02

In a statement, a coalition of groups that includes the Canadian Foreign Policy Institute said it was concerned about “Canada’s role in fomenting the dangerous, escalating conflict in Ukraine.” It urged the Liberals to end arms sales to Ukraine and call a halt to the military training project.

Military and civilian officials are now considering what should happen to Canada’s military training mission and how to get those soldiers — along with Canadian civilians living and working in Ukraine — out of harm’s way.

Planning for the worst

As part of her trip to Ukraine, Joly met with trainers who have been instructing Ukrainian army soldiers and reservists in combat and battlefield first-aid skills.

Lt.-Col. Luc-Frederic Gilbert, Canadian training mission commander, acknowledged in an interview with CBC News that contingency plans for an evacuation have been drawn up. He refused to discuss the details, citing operational security.

“We are not a combat mission,” he said. “Being an unarmed mission, we have different activities here than other missions  across the world. So the answer is, yes, we do have plans …”

Canada’s former military representative at NATO, retired vice admiral Bob Davidson, said getting people out under fire can be challenging but the problems are not insurmountable with enough planning and advance notice.

He acknowledged the federal government has struggled in the past with large-scale evacuations, but the situation in Ukraine would not come as a surprise.

Canada’s most recent example of an evacuation gone wrong was its chaotic departure from Afghanistan last summer — an operation that left dozens of Canadians and people who worked for the Canadian military trapped under the Taliban regime.

Davidson said Moscow will want to make sure non-combatants get out of the way if the shooting starts.

“It would not be in Russia’s best interests to block forces like Canadian forces from getting out of the way because the last thing they really want is to get into any kind of conflict with NATO forces,” he said.

Still, there have been reports that extra Canadian special forces troops were sent to Ukraine to help with evacuation planning.

The military has had a special forces contingent in the country as part of the training mission since the fall of 2020. A source told Global News a separate team has now been dispatched.