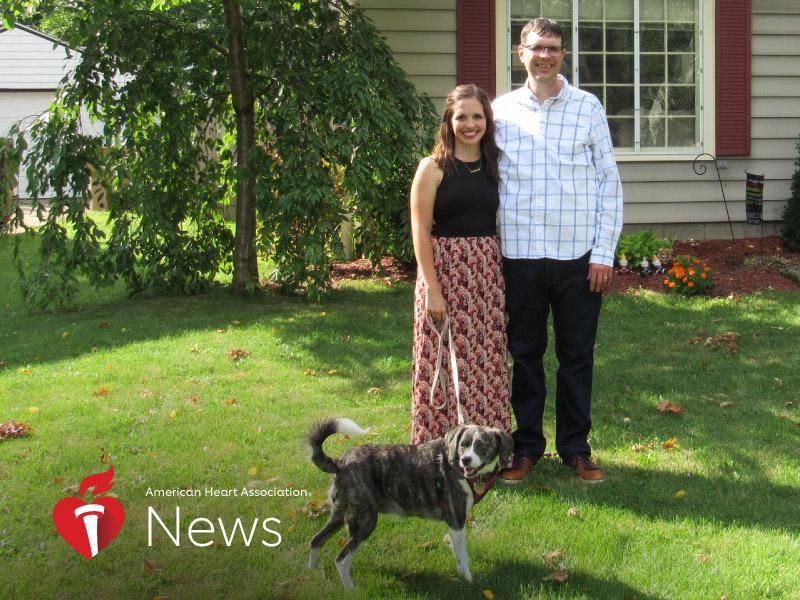 Jeff and Christina Russ – and their beagle mix, Lacey – were walking their regular 2-mile loop through their neighborhood in Cuyahoga Falls, Ohio, when Jeff began to feel winded. It was a warm Sunday evening in early August 2020, and they were headed back home.

Their house sits on a slight incline that could barely be called a hill. But on this day, Jeff, an active 34-year-old, had to stop midway up to catch his breath.

Maybe he was catching a cold. His darkest thought was COVID-19.

The shortness of breath continued for days and brought a racking dry cough. A COVID-19 test came back negative.

Jeff had no appetite, so he forced himself to eat – yet he had a swollen abdomen. Some days he dragged himself to work and other days he called in sick, a rarity for him.

Christina pushed for a doctor’s appointment, but they were only seeing serious cases because of the pandemic. A seemingly healthy 34-year-old with a negative COVID-19 test didn’t seem to qualify.

Jeff managed to get a few virtual exams. He was sent for testing.

Routine blood tests showed some abnormalities that did not concern doctors.

A month after he started to feel sick, Jeff finally had an in-person visit with his general practitioner.

Seeing Jeff’s legs and feet, which had begun swelling in recent days, and his swollen abdomen prompted more tests. One was a blood test to measure NT-proBNP, a hormone released in response to changes in pressure inside the heart, which can point to heart disease.

Reading the results online that afternoon, Christina turned icy cold. Jeff’s NT-proBNP count pointed to heart failure. It was so high that she called the doctor’s emergency number to see if Jeff should go to the ER. She was told to wait for results from an echocardiogram scheduled for the next day.

Soon after, Jeff came home from work. Christina sat him down on their love seat and said, “I think something’s really wrong with your heart, and it’s pretty serious.”

The next day, the echocardiogram confirmed the diagnosis of heart failure. The doctor said it was caused by dilated cardiomyopathy, a disease that enlarges and weakens the heart muscle. Now his care became more urgent. He was sent to an emergency room and put on an intra-aortic balloon pump to help ease the strain on his weakened heart.

Two days later, Jeff was transferred by helicopter to a Cleveland hospital.

He was so sick that he could’ve used a new heart. However, he was ineligible for a transplant because of certain antibodies in his blood.

Instead, doctors implanted a left ventricular assist device. The battery-operated mechanical pump helps the left ventricle pump blood to the rest of the body. The device allows him to perform most activities. LVADs can sometimes be used as a short-term “bridge to transplant,” and sometimes people keep them for years.

Meanwhile, the troublesome antibodies were flushed out of his system.

“I didn’t realize how sick I was until people started to treat me for it,” Jeff said.

In all, Jeff spent 46 days in the hospital. Because of the pandemic, Christina was not allowed to visit for most of that time. They kept up via video, especially when doctors had important news to deliver. She also spoke each night with his nurses.

When Jeff returned home in October 2020, a large welcoming committee of family and friends greeted him outside. Because of COVID-19 concerns, only Christina was allowed with him inside the house.

From December to March, Jeff went to cardiac rehab to regain his exercise capacity.

He pushed himself to get better. After all, he got the LVAD for a new chance at life and wanted to make the most of it.


In the U.S., 1 in every 4 deaths is caused by heart disease.
See Answer

“I wanted to be able to do as many things as I could and not sit around and feel sorry for myself,” Jeff said.

The month of May brought two gifts – the ability to gather with family again thanks to COVID-19 vaccinations and a place on the heart transplant list.

Also in the spring, Jeff was cleared to return to his favorite activity, bicycling.

Before heart failure, he rode 20 miles every weekend. He dreamed of eventually cycling the 87-mile Ohio & Erie Canal Towpath Trail in one day. With that no longer possible, he set a more realistic goal.

Jeff divided the trail into sections and tackled one every weekend. Christina, a runner, bought a bike and started cycling with him. They started in late May with 6-mile sections and eventually worked their way up to 15 miles. They finished the entire trail on Labor Day weekend.

True to Jeff’s nature, he’s finding new ways to make the most of what he can do.

“He’s up for any challenge thrown at him,” Christina said. “And we’ll be ready for the next set of challenges.”

Health Solutions From Our Sponsors