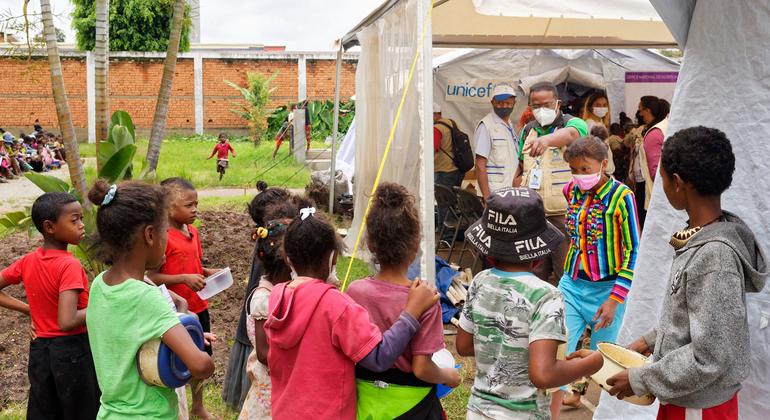 The storm left 92 people dead and has affected another 112,000, the UN humanitarian affairs office, OCHA, wrote on Twitter.  Some 17,000 homes were damaged.

Speaking in New York, UN Spokesperson Stéphane Dujarric told journalists that emergency response teams are deploying to the hardest-hit areas, in support of the Government-led response.

“Additional staff from the UN and NGOs have landed in Madagascar to support relief efforts, thanks to the European Union, which has facilitated the necessary humanitarian air bridge,” he said.

UN agencies, including the World Food Programme (WFP), as well as their aid partners have been ramping-up response in close coordination with Government counterparts.

Cyclone Batsirai struck the eastern coast of Madagascar late on Saturday, making it the second deadly storm in just two weeks, following the passage of Cyclone Ana in the north.

WFP were on the ground providing emergency assistance within hours.

In a report published on Sunday, Martina Azzalea, head of the WFP office in Manakara, recalled the horror.

“Everything was shaking. It felt like claws were pulling the roof. I heard metal sheets ripped from the roofs of nearby houses bang against my door,” she said in a voice message. “Power lines were cut and the whole city was left completely in the dark.”

They have also set up emergency medical posts at the temporary accommodation sites for displaced people.

UNICEF and partners working in water, sanitation and hygiene have delivered kits to affected areas, while others are procuring rehabilitation kits for households, health facilities and schools.

Meanwhile, communication with communities affected by the crisis is being strengthened, including through the mobilization of volunteers and community partners.

FedLoan borrowers will soon see their service switched to MOHELA. Here’s what you need to know

Business Transcription Services: The Key to Run a Business Smoothly 

FedLoan borrowers will soon see their service switched to MOHELA. Here’s what you need to know