One week in, Russia’s war on Ukraine has rocked the world | Russia-Ukraine war News

Athens, Greece – A week into Russia’s invasion of Ukraine, there have already been a number of historic firsts.

As Ukraine’s capital Kyiv and other major cities came under their first attack since World War II, the United States, the European Union and the United Kingdom unleashed the deepest and broadest sanctions on such a large economy as Russia’s for the first time.

European countries have made historic foreign and defence policy moves, while nuclear tensions have risen to their highest level since the Cold War.

Meanwhile, as the fighting continues to rage and a humanitarian crisis unfolds, the fate of Ukraine hangs in the balance.

On February 21, Russian President Vladimir Putin ordered troops into breakaway regions of Luhansk and Donetsk in eastern Ukraine, and recognised them as independent states.

The move effectively killed a high-level diplomatic process that might have led to a summit between Putin and US President Joe Biden to defuse growing tensions, after Russia had amassed between 150,000 and 200,000 troops along the borders of Ukraine.

Putin justified his decision in a pre-recorded speech lasting 55 minutes, in which he blamed NATO for the crisis and said the alliance was an existential threat to Russia.

Despite US and EU sanctions on Russian banks, and Germany halting the process of certifying the Nord Stream 2 pipeline, Putin ordered launched a full-scale assault on Ukraine on February 24.

Russian forces attacked from Belarus to the north, the occupied Crimea Peninsula to the south and its own soil to the east – the biggest Russian military deployment since World War II.

Ukraine’s resistance has been fierce, repelling Russian attacks on the capital Kyiv and other major cities, but Russia attacks air and artillery attacks on populated urban areas have intensified in recent days.

Ukraine’s State Emergency Service has said more than 2,000 civilians have died since the invasion began, although casualty figures cannot be confirmed. The UN human rights office said it had recorded the deaths of 136 civilians, including 13 children.

A major refugee crisis has quickly escalated, with about 874,000 people fleeing Ukraine and the UN refugee agency warning the number will likely exceed one million soon. 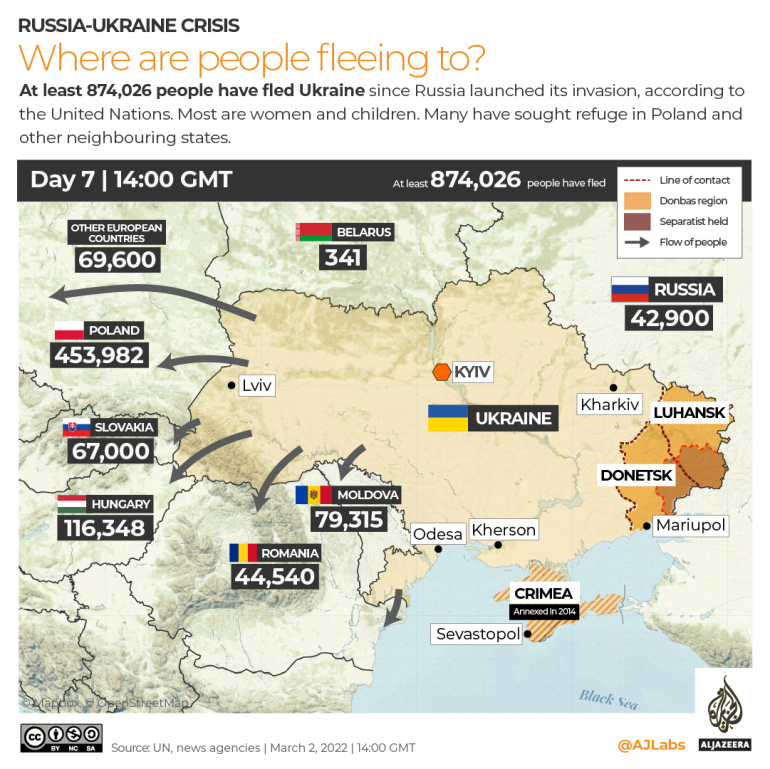 Nuclear tensions also rose, with Putin implying that he could launch nuclear weapons against any country that intervenes against his invasion. On February 27, he ordered Russian nuclear deterrent forces to be put on high alert.

The EU warned that Belarus could start hosting Russian nuclear weapons after the country’s non-nuclear status was dropped following a referendum.

Yet, the political will for a common European foreign and defence policy, elusive for decades, appears to be forming.

The EU is for the first time financing the purchase and delivery of weapons to a country at war, giving Ukraine half a billion euros ($556m) for munitions, and Germany has reversed its historic policy against sending arms to conflict zones.

“What COVID did for [the EU’s] fiscal union, Russia did for defence union,” said George Pagoulatos, director at the Hellenic Foundation for European and Foreign Policy.

“This development has been a huge accelerator to European defence. It was France that was pressing for this, and Germany that resisted because of the increased cost. Now we see Germany graduating from its post-war pacifism, approving a huge defence package – the approved increase in spending of 100bn euros more than doubles its current defence budget.”

Meanwhile, Russia has become increasingly isolated, as economic sanctions – as well as cultural and sporting boycotts – were ramped up.

“Putin is the aggressor. Putin chose this war. And now he and his country will bear the consequences,” Biden said after Putin ordered the invasion. Biden extended full blocking sanctions to four more Russian banks, including the second-largest, VTB.

Russia analysts believed the most consequential sanctions came in the form of export bans of sensitive US technologies, especially in the aviation, maritime and defence sectors.

Following sanctions announcements, Moscow’s stock exchange plummeted by an unprecedented 45 percent, prompting an intervention by the central bank to shore up the liquidity of banks. The Moex recovered somewhat to close at -33 percent on the day.

“We don’t know how long the war will last, which means there will be massive market uncertainty and volatility,” Zavvos told Al Jazeera.

“This invasion will raise energy prices. Our analysis is oil will reach $120 a barrel and above. This creates high inflation and slow growth, disrupts international trade and lowers confidence for both business deals and households. This, in turn, creates a danger of stagflation – low growth and inflation through supply shocks.”

Zavvos believed energy will cause the US and EU to decouple monetary policy, with the dollar strengthening against the euro.

“America will continue to raise interest rates to stop inflation, but in Europe, the energy shock is much stronger, so [the ECB] will continue quantitative easing. It’s also more closely bound to trade with Russia.”

More sanctions have since been announced – such as the expulsion of selected Russian banks from SWIFT, the interbank messaging system, which effectively cuts them off from the global financial system. Russian airlines are banned from EU and US airspace, and the EU has banned Russian state-owned media Russia Today and Sputnik.

Meanwhile, Zelenskyy – who has remained in Kyiv to rally his people against the invasion – officially signed Ukraine’s request to join the EU on Monday.

Despite a heroic resistance on the ground, and $1.6bn in US and EU military aid, Ukraine’s armed forces have been losing ground to the inexorable march of a larger and better-armed Russian army.

The Russian army claimed it has taken control of the strategically important city of Kherson in southern Ukraine on Wednesday. A 64km convoy of hundreds of Russian tanks and other vehicles is on a road to Kyiv and Russian forces have encircled the eastern city of Kharkiv and the port city of Mariupol.

Meanwhile, many Ukrainian civilians have rushed to arm themselves and join in the defence of their cities, setting the stage for intensifying violence to come.

“[Putin] appears to have gambled quite dramatically with some quite curious odds, so whether he’s miscalculated we have to wait and see, but he’s certainly bitten off, in military terms, an enormous challenge,” says Samir Puri, a senior fellow at the International Institute for Strategic Studies.

What would a Russian victory look like? “It’s not likely that the goal is annexation of Ukraine,” Puri told Al Jazeera, adding that should Ukrainians put up a long resistance, he believes the country could become partitioned.

“I would imagine the best possible outcome for Putin is that Ukraine ends up something like Belarus, which is an independent sovereign state but one that pledges fealty to Moscow.”