Here are all the latest updates:

Civilians will be allowed to leave Mariupol, Ukraine between 12:00-17:00 Moscow time on Saturday, Russia’s RIA news agency has cited city authorities as saying.

Russia said earlier its troops which have encircled the Azov Sea port city in Ukraine’s south would stop firing and allow civilians to pass.

Hundreds of people have marched in Tokyo protesting Russia’s invasion of Ukraine.

The crowd shouted, “Stop war. Protect lives.” Some held signs that read: “We stand with Ukraine.” Others held images of Putin with the words: “Stop Putin.”

Russia’s shelling of a nuclear plant in Ukraine on Friday and Putin’s implied threat of nuclear war have struck a nerve in Japan, which suffered atomic attacks at the end of World War II in Hiroshima and Nagasaki, as well as the worst nuclear catastrophe since Chernobyl in Fukushima in 2011.

The ministry confirmed its units have stopped firing and opened humanitarian corridors near the cities of Volnovakha and Mariupol which were encircled by Russian troops.

PayPal shuts down its services in Russia

Payments company PayPal Holdings Inc has shut down its services in Russia, citing “the current circumstances,” joining many financial and tech companies in suspending operations there.

“Under the current circumstances, we are suspending PayPal services in Russia,” President and Chief Executive Dan Schulman said in a statement. He added that the company “stands with the international community in condemning Russia’s violent military aggression in Ukraine”.

A company spokesperson said PayPal will support withdrawals “for a period of time, ensuring that account balances are dispersed in line with applicable laws and regulations”.

Russia’s defence ministry has announced a ceasefire to allow residents of two besieged cities, including the strategic port town of Mariupol, to evacuate.

“Today, March 5, from 10am Moscow time, the Russian side declares a regime of silence and opens humanitarian corridors for the exit of civilians from Mariupol and Volnovakha,” the ministry said.

There is no immediate confirmation from Ukrainian forces, and it is not immediately clear how long the evacuation routes would remain open.

Russian state gas company Gazprom was shipping natural gas to Europe via Ukraine in the same volume of 109.5 million cubic metres per day as on Friday, the state-owned RIA news agency has cited Ukraine’s pipeline operator company as saying.

Russian forces will stop firing at 10:00 Moscow time to allow humanitarian corridors out of the Ukrainian cities of Mariupol and Volnovakha, according to Russia’s defence ministry, Interfax has reported.

SpaceX chief Elon Musk has said that its Starlink satellite broadband service has been told by some governments, not Ukraine, to block Russian news sources.

“We will not do so unless at ‘gunpoint’, sorry to be a free speech absolutist”, he said in a tweet.

Starlink has been told by some governments (not Ukraine) to block Russian news sources. We will not do so unless at gunpoint.

Sorry to be a free speech absolutist.

Earlier this week, the SpaceX chief warned there is a high chance that its Starlink could be “targeted” in Ukraine.

The Washington Post to remove bylines by journalists in Russia

Following Russia’s new law, The Washington Post will remove bylines and datelines from stories produced by its journalists in Russia, a Washington Post reporter has said.

Singapore has announced sanctions against Russia that include four banks and an export ban on electronics, computers and military items, in a rare move by the Asian financial hub in response to what it said was Moscow’s “dangerous precedent” in Ukraine.

“We cannot accept the Russian government’s violation of the sovereignty and territorial integrity of another sovereign state,” its foreign ministry said in a statement, which gave no timeframe for when the sanctions would take effect.

“For a small state like Singapore, this is not a theoretical principle, but a dangerous precedent. This is why Singapore has strongly condemned Russia’s unprovoked attack.”

A large explosion has lit up the night sky in Chernihiv, as Russia pressed on with its assault on the strategic Ukrainian city that lies 143km (88 miles) from the capital Kyiv.

Homes were heavily damaged by airstrikes earlier in the day, when a Russian bombardment killed 47 people, according to local officials.

Ukraine’s strategic port city of Mariupol is under a “blockade” by the Russian army after days of “ruthless” attacks, its mayor has said, calling for the establishment of a humanitarian corridor.

“For now, we are looking for solutions to humanitarian problems and all possible ways to get Mariupol out of the blockade,” said Vadim Boychenko in a message posted on Telegram.

Brazil’s government has said it will issue temporary humanitarian visas and residency permits for Ukrainian nationals and other individuals who have been affected or displaced by the conflict.

The visas will be valid for 180 days and arriving Ukrainians can apply for residency permits lasting two years, according to the text published in the nation’s official gazette. Brazil will require, among other documents, a certificate attesting to the person’s clean criminal record.

Brazilian media have reported that the country has Latin America’s biggest population of Ukrainians and their descendants, ranging between 500,000 and 600,000, according to an estimate from Ukraine’s embassy. 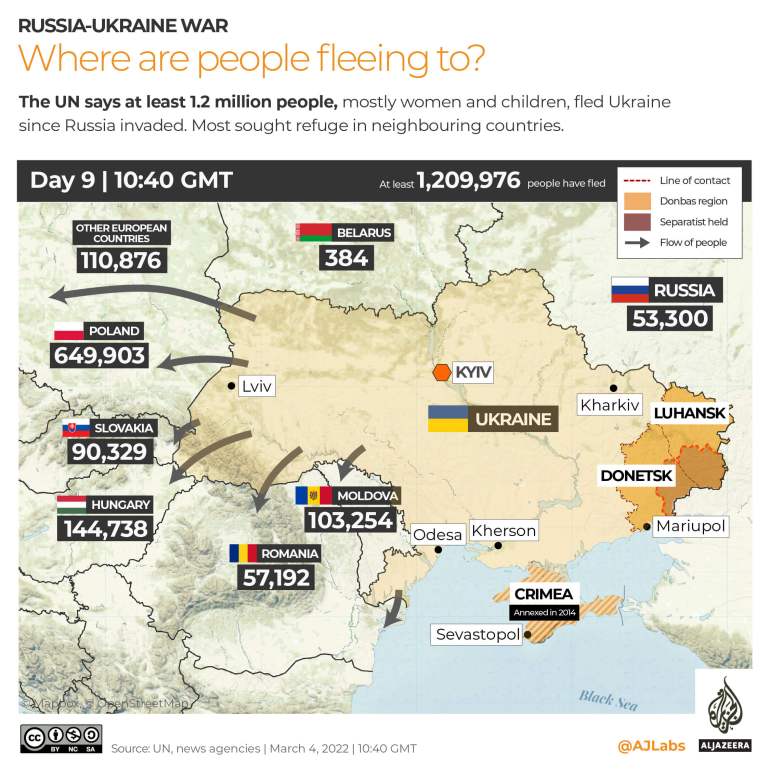 The head of Ukraine’s security council has called on Russia to create humanitarian corridors to allow children, women and the elderly to escape the fighting.

Oleksiy Danilov said more than 840 children have been wounded in the war. A day earlier, the Ukrainian government put the death toll among children at 28.

“The question of humanitarian corridors is question number one,” Danilov said on Ukrainian television. “Children, women, elderly people – what are they doing here?”

The UN Security Council will hold an emergency meeting on the humanitarian crisis triggered in Ukraine by the Russian invasion, diplomats have said.

After this public session, the 15 members of the council will confer behind closed doors to discuss a possible draft resolution, a diplomat speaking on condition of anonymity told AFP news agency.

The US embassy in Ukraine has said that attacking a nuclear power plant is a war crime after Russia seized a Ukrainian nuclear facility that is the biggest in Europe.

The statement on the embassy’s Twitter account went further than any US characterisation of Russia’s actions in Ukraine since it launched its invasion on February 24.

“It is a war crime to attack a nuclear power plant. Putin’s shelling of Europe’s largest nuclear plant takes his reign of terror one step further,” US embassy Kyiv said in its post.

US Senate to have call with Zelenskyy

The Ukrainian embassy in Washington has arranged a Zoom call between the US Senate and Ukrainian President Volodymyr Zelenskyy, two Senate aides have said.

Bloomberg News has said it was temporarily suspending the work of its journalists inside Russia, citing a new law that could mean jail for those found to be intentionally spreading “fake” news.

“The change to the criminal code, which seems designed to turn any independent reporter into a criminal purely by association, makes it impossible to continue any semblance of normal journalism inside the country,” Bloomberg Editor-in-Chief John Micklethwait said in a statement.

Zelenskyy has criticized NATO for ruling out a no-fly zone over his country, saying the Western military alliance knew further Russian aggression was likely.

“Knowing that new strikes and casualties are inevitable, NATO deliberately decided not to close the sky over Ukraine,” he said in a video published by the presidency.

“Today the leadership of the alliance gave the green light for further bombing of Ukrainian cities and villages, refusing to make a no-fly zone.”

CNN to stop broadcasting in Russia after new law

CNN will stop broadcasting in Russia, the news channel has said.

“CNN will stop broadcasting in Russia while we continue to evaluate the situation and our next steps moving forward,” a spokesperson said.

The decision comes after the Russian parliament approved a proposed law that would allow authorities to imprison people for up to 15 years if they are convicted of spreading intentionally “fake” information about the country’s armed forces.

Zelenskyy has reiterated remarks made earlier by the country’s United Nations envoy, who accused Moscow of “nuclear terrorism” after a fire broke out at a training facility near the Zaporizhzhia nuclear power plant.

He added: “At the #UN Security Council meeting, we called for closing the sky over 🇺🇦 and launching an operation to maintain peace and security. The goal is to save hazardous facilities. The world must not watch, but help!”

The Canadian Broadcasting Corporation (CBC) and Radio-Canada have said they had temporarily suspended their reporting from the ground in Russia, citing a new law that could mean jail for those found to be intentionally spreading “fake” news.

“CBC/Radio-Canada is very concerned about new legislation passed in Russia, which appears to criminalize independent reporting on the current situation in Ukraine and Russia,” they said in a statement posted online.

Russia’s communications regulator says it is blocking Facebook in response to what it said were restrictions of access to Russian media on its platform.

The regulator, Roskomnadzor, said on Friday there had been 26 cases of discrimination against Russian media by Facebook since October 2020, with access restricted to state-backed channels like RT and the RIA news agency.

The company this week said it had restricted access to RT and Sputnik across the European Union and was globally demoting content from Russian state-controlled outlets’ Facebook pages and Instagram accounts, as well as posts containing links to those outlets on Facebook.

US ‘committed to helping Ukraine defend itself’, Biden says

Speaking ahead of a meeting with his Finnish counterpart, Sauli Niinisto, Biden added: “We’re committed to helping Ukraine defend itself and support the humanitarian needs of the Ukrainian people.”

Western and Ukrainian diplomats have accused Russia of recklessly endangering global safety after a fire broke out at a training facility near the Zaporizhzhia nuclear power plant – charges that Moscow dismissed as “lies”.

At a UN Security Council meeting on Friday, Kyiv’s envoy Sergiy Kyslytsya accused Moscow of “nuclear terrorism” over the incident, saying that Russia’s invasion of Ukraine is an attack on “humanity”.

Moscow’s envoy to the UN, Vasily Nebenzia, however, dismissed reports that Russian troops attacked the Zaporizhzhia plant as “lies” and “disinformation”.

The foreign ministers of the G7 released a joint statement condemning the Russian invasion of Ukraine and calling on Moscow to end its “aggression” and immediately withdraw its forces.

“We urge Russia to stop its attacks especially in the direct vicinity of Ukraine’s nuclear power plants,” the statement said.

“Any armed attack on and threat against nuclear facilities devoted to peaceful purposes constitutes a violation of the principles of international law. We support the initiative of IAEA Director General Grossi announced today for an agreement between Ukraine and Russia to ensure the safety and security of nuclear facilities in Ukraine.”

Welcome to Al Jazeera’s continuing coverage of the Ukraine-Russia crisis.

Read all the updates from Friday, March 4, here.